“In this important book, Adler, a mathematician, management consultant, and self-proclaimed “numbers junkie,” equips mothers with researched data behind recommendations for what to do (and not do) during pregnancy…She writes in a tone that is both authoritative and assuring—that of a mother rooting for all other mothers.” —Publishers Weekly 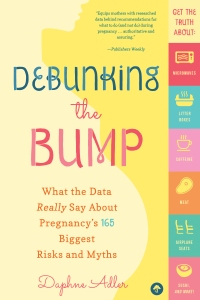 “Ms. Adler has taken the time to research many of the top concerns of pregnant women and not simply give a recommendation for whether or not something is safe, but to talk about it in a manner that puts it in perspective … A valuable read.” —About.com

“Adler spent three years examining thousands of studies before compiling her findings … the result is a detailed, often surprising examination that puts accepted pregnancy precautions into perspective, and even occasionally overturns prevailing wisdom … an essential resource for any mothers-to-be who want to be more informed about the choices they make during pregnancy.” —Nine In the Mirror

“Ms. Adler has done her homework. Her book is especially useful for those who teach pre-conception and early pregnancy classes and will help any birth educator answer many of the tough questions asked in childbirth classes about pregnancy issues.” —The Family Way

“Debunking the Bump is a useful reference book for the research-minded parent and for the educator.” —Babble.com

If you’re like most expectant parents, you worry about what you should and shouldn’t do to ensure the health of your baby. Many of us change our behavior and feel anxious and uncertain, in part because we’re constantly bombarded with advice about what to avoid during pregnancy.

When Daphne Adler, a mother and mathematician with a BA and MBA from Harvard, was scolded by a colleague for putting parmesan cheese on her pasta, she dutifully dumped her dinner in the trash, but then decided to investigate to find out whether the admonishment and similar warnings were based on fact. What she discovered surprised her, and led her to take a deeper look at all the supposed threats and dangers we’re concerned about when we’re expecting.

Ms. Adler, a mother of three, spent hundreds of hours poring over academic studies and government data sources. The result is a groundbreaking piece of research: the first time anyone has ever looked at pregnancy exhaustively. The author obsessively investigated every foodborne pathogen in the U.S., every pesticide in use, every environmental contaminant with known developmental effects, even every source of death for women of childbearing age, before compiling her recommendations.  As a result, she uncovered a number of threats to pregnancy that other guides never even mention.  But she also discovered that many of the threats women worry about are actually irrelevant, and shouldn’t be causing unnecessary stress. Unlike most parenting books which make unsupported and frequently incorrect statements, Debunking the Bump provides evidence for every single statement made (the book has over 1,000 citations!).

Some highlights from Ms. Adler’s eye-opening discoveries include:

DEBUNKING THE BUMP is a pregnancy book for those with a thirst for factual information. It covers not only all the hot pregnancy topics (Is it safe to eat sushi and drink coffee?), but also a variety of additional subjects that aren’t even mentioned in most pregnancy books. It provides practical, actionable recommendations, and puts risks into context so women can understand the trade-offs, make informed choices, and ultimately enjoy a relaxed and happy pregnancy.

Available as a Kindle ebook here:

As a paperback here (US):

As a paperback here (UK):