France: “In the early 1990’s, word broke that the European Union was going to require all cheese to be pasteurized. It was a rumor. But it spread through France like a brush fire fanned by the mistral. Cheese makers, chefs, shop owners and buyers panicked, and their Gallic pride kicked in. They signed petitions. They made noise in the news media. France’s beloved cheeses made from raw milk, its Camembert, its Chabichou, became symbols of cultural identity. ‘If we had to pasteurize our cheeses,’ said Jean Pierre Moreau, a cheese maker in the Loire Valley, ‘there would have been a revolution.’”[i]

London: “A supermarket has apologized to one of its customers after she was told she could not have unpasteurized Cheddar cheese because she was pregnant. Janet Lehain, 31, asked for the mature cheese at the deli counter in a Sainsbury’s store in Bedford last week. But Ms Lehain’s server told her she should have another type of Cheddar. In a letter of complaint, she described it as ‘the most patronizing encounter I have had the misfortune of experiencing in a long time.’ She said she only succeeded in persuading the member of staff at the Fairfield Park store to sell her the cheese by promising not to eat any of it herself.”[ii]

Cultural differences? Certainly. Differing attitudes towards risk? Perhaps. But at heart, the debate over cheese is a debate that should be resolvable with recourse to the facts. Is cheese actually risky during pregnancy? If so, how risky?

Here’s the conventional wisdom from a typical parenting website: “Is it safe to eat soft cheese during pregnancy? That depends on the cheese. If the cheese is made from pasteurized milk, it’s fine. But some cheese is made with raw (unpasteurized) milk, and it’s not safe to eat or drink anything made with raw milk during pregnancy. Most cheese sold in the United States – including soft cheese – is made with pasteurized milk and is therefore considered safe to eat. But some cheese made from raw milk also shows up on store shelves and at farmer’s markets, so it’s best to check the label before eating any. (Sara R., Genetic Counselor)”  Who knows, perhaps she’s right about the cheese, but why exactly has a genetic counselor been nominated as an expert on the prevalence of bacteria in a food product? Next we’ll be asking our pharmacist for help with buying a used car and our lawyer for gardening advice.

Enough of this silliness. Cheese and other dairy products earn their reputation as risky foods because they could be contaminated with a type of bacteria called Listeria.  Listeria infection is extremely rare, but the bacteria has a creepy predilection for infecting pregnant women; and unlike most bacteria, it can sneak past the protective barrier of the placenta and attack the fetus. So while it barely registers on the list of common pathogens (there are a full 24 other foodborne infectious diseases that are more common than Listeria), it causes by far the most fetal deaths each year.

So let’s turn to data from a report published by the US Food Safety and Inspection service (FSIS) which estimates the risk of contracting Listeria from various types of foods. [iii][1] What have they concluded? The answers may surprise you:

Guess what? Deli meat tops the list – this food category is over 10,000 times more dangerous than Brie and Camembert per serving. The results are even more striking when taking into account the typical frequency with which these foods are eaten by the average American, to reach a predicted number of cases of Listeria per year by food category: 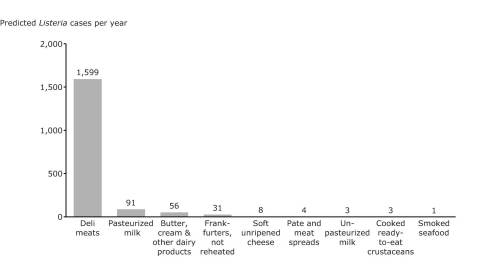 Deli meat clearly emerges as THE single biggest hazard from Listeria facing the pregnant US population, simply dwarfing all others. No other food category even comes close in terms of importance, with deli meat representing 89% of cases, or over 8 times the risk of all other foods combined. So if you want to avoid Listeria, you simply need to heat any meat before eating it.

As a final aside, the second most dangerous food is ordinary pasteurized milk. Milk has a relatively low risk per serving, but is consumed so frequently that cumulatively, the risk is higher than for other less common foods. So if you still insist on obsessing about your dairy products, it should be your morning bowl of cereal, rather than the occasional restaurant cheese plate, that makes you think twice.

[1] It was developed according to the following approach: “Listeria contamination data are based on 387 studies with over 346,000 samples…Expert advice on scientific assumptions was actively sought from leading scientists from academia, industry, and government…In addition, the risk assessment was initially published in draft form and public comments sought for six months.” The authors of the report must have been anticipating some seriously heated debate; or perhaps this is simply how the government always conducts its research. At least we can conclude they have done their homework.